← HOME
shreyans.org
WHAT I LEARNED AT VENMO 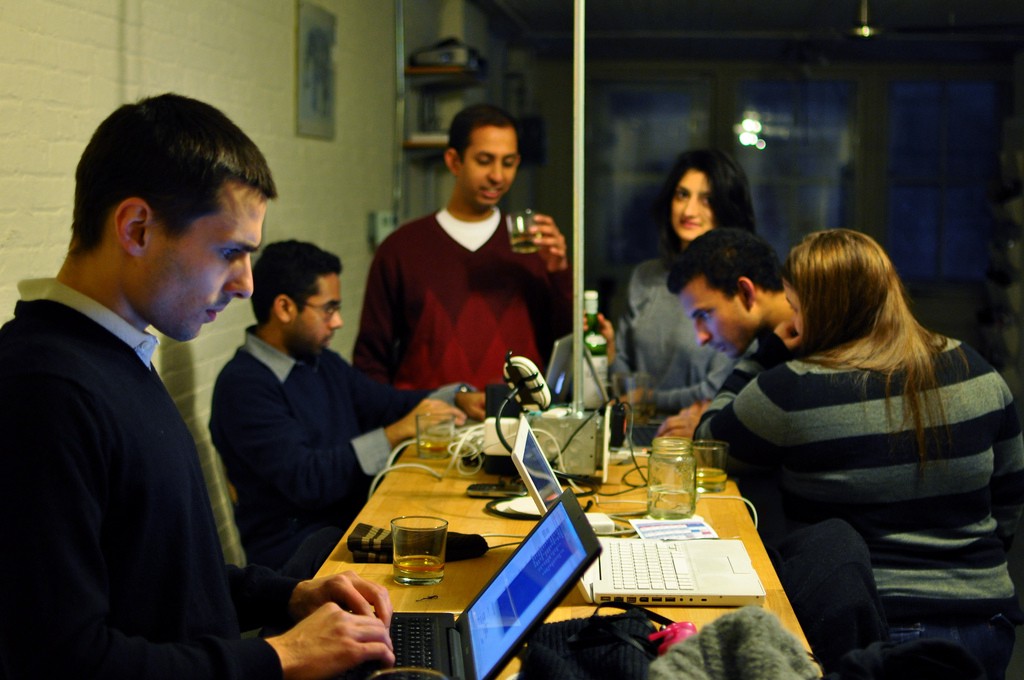 A few trips to Philadelphia later, I joined Venmo as the first employee after Iqram and Kortina, both close friends and roommates from college.

My time there was intense, physically and emotionally. I joined knowing nearly nothing about startups, building products, or web engineering, and certainly nothing about payments. I knew little other than that Kortina and Iqram lived by few conventional rules, believed intensely in their ideas, worked relentlessly on them, and knew how to have a really good time.

The first thing I noticed was that Iqram and Kortina were always showing off Venmo. At every interaction on the street, at a bar, with new neighbours, they had their phones out and asked: “What’s your number? Lemme send you some money.” Nobody said no to that. I followed along, and there wasn’t a day when a few new people didn’t receive $1 (or $5 for a drink) from one of us.

The benefits were endless. We signed up the Philly and New York tech communities that formed the core of our early user base. We signed up groups of friends so they could use it together. We gave people money so they’d have a reason to sign up. We made countless improvements to our signup flow. We learned people’s concerns, and which pitches they connected most with.

This relentless evangelism led to us finding our early engineering team. In mid-2011, following our Series A, we moved from Philly to New York, and set out to grow the team. Iqram was always in a Venmo t-shirt, and one day on the street, Matt Hamilton, a Columbia student and Venmo user, noticed the shirt and stopped to chat with them. They hit it off and over the next two weeks, Matt introduced us to Julian, Jesse, John, Danny, his friends from high school and college. Julian brought along Alan, a friend from Hacker School. Two Hacker School alums, three Columbia CS grads — we had our engineering team. Matt himself joined us a while later. 6 engineers through one conversation on the street.

Building a financial product is fraught with obstacles, and we lived “ask for forgiveness, not permission.” The first credit card processing account was originally set up for a very different business: a yogurt shop. Almost a year later, moments after landing in Austin for our first SXSW Interactive, we got an alert from our bank and logged in to find a negative $44,000 balance!

The processor had frozen our account because they didn’t get the new business and (lack of) business model. After two frantic days of phone calls and slapping together our first set of financials for the processor, we reached out to one of our VCs, related to the CEO of the company that owned the processor. They got our account unlocked in time to demo the product to hundreds of SXSW attendees and many investors (of course, by sending them a dollar at a time, out on the streets).

A similar pattern repeated a year later, when a government notice about mandatory money transmitters licenses in all 50 states, required within 6 months, forced us to kick our regulatory processes into high gear.

We were emboldened partly by naivete, and partly by a philosophy of focusing only on the most important things: the product and the users.

In early 2011, we faced a major existential identity crisis. We didn’t have the traction we wanted, the product direction was unclear, and we started to doubt things we previously believed. One cold week, 6 of us sat around a conference table and threw around ideas for a pivot. I don’t remember most of them but remember we discussed ebooks. What?! The founders listened silently. Andrew Staub, who had joined a week earlier, was shocked and disappointed and made a presentation for why we should keep working on Venmo. A week later, the founders unequivocally stated that we’d press on, and we did.

Looking back, I’m not surprised we doubted ourselves. Inventing something that requires people to change their behaviour is hard. Sustaining a belief in such a product in a world of stories of “overnight successes” is harder still. I’ve since gained an appreciation for just how difficult building a product is, and that things take time. I also believe that such existential crises are normal, and the key is to not forget the few core truths that drive your vision.

We spent months debating this. Too many people were involved and tensions ran high, tensions that persisted for months after we ended the debate. The tension was fueled by a lack of structure for making this decision and considering tradeoffs, an abundance of argumentative voices, mine included, and by the personal nature of the decision — we were the heaviest users of the service.

Ultimately we ended up with a public feed, vacillating between opt-in and opt-out sharing, a tough outcome for me at the time (I was initially in the ‘private payments’ camp), but a decision I eventually realized was critical to our success.

Kortina and Iqram rarely described Venmo as a payments company. Venmo was about doing things with friends, easing the social tension that had previously accompanied financial exchanges, and ultimately about focusing on communicating the feeling behind an interaction instead of focusing on the money exchanged. Through that lens, the social layer of Venmo was the product. Furthermore, building trust in the system and making this new behaviour seem normal were key steps towards adoption, and the social features made these possible.

Both Iqram and Kortina were masters of leading by example. In my first year, I used to get into work around 730am, and leave around 1030pm — long days by most standards. There was rarely a day when Kortina arrived later or left earlier. He never asked me to work those hours, but seeing his example pushed me to match it. Similarly, there was hardly a weekend where Iqram didn’t design and prototype a new product tweak or distribution strategy. That too drove me to think beyond how to build what had already been designed to thinking about what should exist, and get started on that.

Both these habits were hugely beneficial. They taught me a lot, quickly. That said, both habits aren’t how I choose to work today: rest, structure, and focus matter more to me now than they did back then, and I believe I’m a more effective builder today.

The founders were also masters of seeking out special people. As they took a chance on me, they did the same with many others. While recruiting, they were constantly on the hunt for that special something that pointed to immense potential. What cool stuff have they built in their own time? What are their hobbies? Are they left-handed? If you threw them in a tiger pit, would they stand a chance?

Sometimes their instincts were off, but more often, they were spot on. That insistence on creativity, and the autonomy that was built into the culture, made Venmo a place where people could experiment, learn, and grow tremendously. The team I worked with has largely left, and they’ve gone on to do a broad range of interesting new things.

In three years, I went from knowing almost nothing about web engineering to building a significant portion of the Venmo backend. In my first year, there was hardly a night or weekend I took off from thinking or working on engineering. I had a lot to learn and dedicated all my time to practice. I started by fixing bugs and making small changes to the front-end, then tackled whole features for the website, then handled payments on the backend, then the infrastructure. I made plenty of mistakes: features built prematurely and never used, design decisions that I found baffling a few months later, and most stressful (and thus most educational) of all, bugs that resulted in lost or misplaced money, and some very upset users.

After a year of work on all sides of the system, there was little that happened on the website or backend that I hadn’t touched. When our backend team grew, it was natural for me to spend more of my time answering questions, discussing problems and solutions, planning our work, and generally helping others be effective.

I grew as an engineer, product thinker, and leader in those few years because I had a project I believed deeply in, and a feeling of ownership — an environment in which hard work didn’t feel like the hard work I had encountered previously in life. This time it felt more personally meaningful, and I threw myself at it with no hesitation.

Perhaps the most enduring lesson from Venmo is that the world is made by people just like me. Going in, none of us knew anything about payments, chargebacks, or ACH. I barely understood how a website worked. Yet we managed to build a service that saw over a billion dollars of transactions last month. It took time, energy, and a lot of great people, but there was no magic, and we held no special keys.

This singular lesson: that we can impact the world, led to my current company, Socratic, where we’re tackling challenging problems in education.

Others from the team have gone on to make Fin, Kottu House, Grailed, vyvn, Abacus, customer.io, Hopscotch, Finkel and Garf, DesignLab, Past You, Bond Street, Loveseat, Point, Hyper, and probably many others I haven’t heard of yet. This world is ours. We are the ones who will shape it. Let’s do big things.

Thanks to Iqram and Kortina for an amazing opportunity. Thanks to Asha for supporting me and helping me with everything. Thanks to Asha, Chris, Kortina, Ahmed, Becca, Staub, Stefan, and all of Socratic for reading and editing this, and to Elisabeth for pushing me to write this.